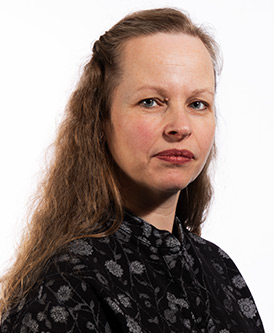 
Tray Wilson is the Senior Lecturer and Course Leader for the FdA Performance: Theatre & Drama and the BA (Hons) Top Up in Performance. As the Senior Lecturer in Performance, Tray is responsible for the curriculum design, organisation, teaching, and assessment. Tray has taught actor training, performance practice, and has directed students in various productions at a number of other Higher Education Institutions including the University of Huddersfield, the University of Central Lancashire, and the Northern School of Contemporary Dance. She has also taught yoga, capoeira, kung fu, and kalarippayattu as a part of, and separate from university performance courses.

During her first degree, Tray co-founded an experimental physical theatre company called Splinter. Splinter explored the use of physically based skills such as acrobatics, lifts and movement to create ensemble and improvisational structures. Splinter worked primarily with devised performance material which was often in response to specific sites (including an old pub, a court room, and a derelict quarry). In 1995, Tray was awarded a research bursary to investigate the practices of historical and contemporary practitioners involved in laboratory actor training. Whilst carrying out this research, she continued to make work as a theatre practitioner and began teaching part time at the University of Huddersfield.

Tray’s performance background is in physical theatre informed by the European Laboratory tradition. She has trained under practitioners such as Phillip Zarrilli, Nicolás Núñez, Deborah Middleton, and John Britton. Tray also practices a number of martial arts (capoeira, t’ai chichuan, kalarippayattu, kung fu, MMA) which she uses to develop and inform her own training and that of her students. In 1995 she attended a ten-day intensive training workshop with Phillip Zarrilli, and she has continued training in his particular psychophysical actor training to date. She performed Act Without Words II, and Play by Samuel Beckett under the direction of Zarrilli in August 1997.

Tray has directed a number of performances with students, community groups and professional actors. In 1998 she was awarded the Hull Truck Director’s Award at The National Student Drama Festival for her direction of Terminal by the Open Theatre. She has also performed in a number of productions including Shipwrecked Sailor directed by John Britton, An Evening of Beckett directed by Phillip Zarrilli, Knock Knock with the theatre company Fully Body and the Voice, and Clouds in the Cotton Weave, an immersive performance under the direction of Nicolas Nunez.

More recently, Tray has been exploring the connections between spirituality, actor training and performance. This research has taken the form of laboratory-type training with a number of advanced practitioners developing some of the work through to performance, in particular this has included an exploration of The Dybbuk, (a two-hander adaption written by Bruce Meyers) and The Dream Shedding, an adaptation of a short story written by Deborah Templeton.

Tray is currently undertaking a PhD in psychophysical actor training at the University of Huddersfield. This is a practice-as-research PhD which is greatly informed by her own practice as an actor trainer and performer.

Tray holds two 2nd Dan black belts, has a degree in Theatre Studies, an MA in Ensemble Physical Theatre, and a PGCE

Splinter (Dec 1994) Co-devised, directed and performed Punishment a physical theatre performance based on the poem by Seamus Heaney
Splinter (Feb 1995) Site specific performance at Pule Hill as part of the Northern Exchanges Symposium, University of Huddersfield.
Splinter (May 1995) Improvised performance presented as part of Vision Collision, Manchester.
Prisoners of Memory (Sep 1997) Co-devised, directed and performed a piece exploring memory.
Waiting (April – May 2000) Co-devised, directed and performed a piece exploring the experiences of 3 women during the crucifixion.
Ayna in association with Chol Theatre Company Tricked Me Yaar! (June – Aug 2000) Director for a community-based project working with young people which culminated in a performance at Oldham College.
Full Body and the Voice. (July 2002 – Sep 2003) Deviser/ performer with the company during their production of Knock Knock which toured the UK, Belgium, France and Hungary.
John Britton (Sep 2007) Performer in Shipwrecked Sailor performed at The Lawrence Batley Theatre, Huddersfield.
The Dream Shedding (March – June 2013) Director of a 3 women performance piece which appeared as part of the First Break Festival, Oldham Coliseum Theatre 2013.
Out in that Crystal Land (April 2016) deviser and performer in a collaborative performance with fine art video and live music.
Clouds in the Cotton Weave (Sep 2018) performer in an immersive performance directed by Nicolas Nunez and written by Deborah Middleton, performed at the University of Huddersfield.

Explorations in the Use of Drama for the Teaching of Leadership to Business Students’ conference paper delivered at The Academy of Management, Belfast, Nov 2014.
‘TAPs and Performance Training’ delivered at the 3rd UCO Research Symposium, July 2018.