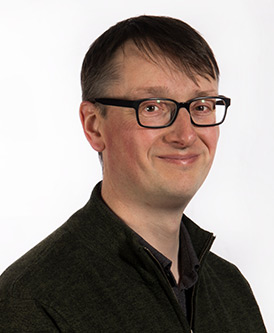 
Ben is an assistant in the HE Library & Resource Centre at UCO. He is the subject specialist in Psychology and Health & Social Care. Drawing on his extensive research experience, he produces “how to” resources (in the form of booklets and tutorial videos) on research skills, e.g. research methodologies, using online databases, literature reviews.

He is a member of the Research and Scholarly Activities Group, and the Ethics Committee, at UCO. Ben is about to start a Distance Learning MA in Information and Library Studies at the University of Aberystwyth.

Ben’s research covers a wide range of subjects within the Humanities.

Literature: Ben’s doctoral thesis was on Literary re-appropriations of Latin liturgical hymns, from Walter Scott to Christina Rossetti. In a forthcoming article he will reveal a previously unrecognised poem by Rossetti. He was awarded the Postgraduate Essay Prize of the British Association for Romantic Studies in 2005.

Ben lectured at Leeds Trinity and All Saints. Courses he taught included the MA in Literature and Spirituality, and undergraduate courses on Reformation Studies, Christian Worship, and 19th-Century Literature.

Art history: Ben’s MA thesis on the artist David Jones was awarded a distinction, and formed the basis of a paper at the International David Jones conference in 1997. As the Henry Moore Fellow in Sculpture Studies, Ben worked in the photographic libraries of the Courtauld Institute of Art, while carrying out the research for his book The sculpture of Leon Underwood. He is regarded as the leading authority on Underwood’s sculpture.

Music: As founding director of the Orkney Schola (plainsong choir), he has produced the first modern reconstruction of the medieval “office” (sung Latin services) for the feast of St Magnus. The Schola performed these chants during the Magnus 900 festival in 2017, and as part of a talk that Ben gave on BBC Radio Orkney. He has published an article on this project in Scottish Music Review. Ben also wrote the booklet Music in the liturgy for CTS Books.

Church history: Ben was a research and editorial assistant for The letters and diaries of John Henry Newman (Oxford University Press). He was assistant editor of the liturgy journal Usus antiquior.

History of Orkney: Ben curated an exhibition at Skaill House, Orkney, about the Orcadian soldier H.W. Scarth’s service in the Russian Civil War. He is currently editing the nineteenth-century travel diaries of another Orcadian soldier, James Barry.

Ben’s diverse working experience has included eight years as a steward at prehistoric sites in Orkney, seven years in archives/libraries, and two years in museums/galleries; and he has been a labourer on an organic farm, an adult education lecturer, a contestant on University Challenge, and a Benedictine monk. Ben won student writing prizes at Manchester Grammar School and Oxford University. He played Lennox in Kristin Linklater’s 2018 production of Macbeth. He has exhibited photographs and stone carvings and has an Etsy shop for his hand-bound books. He is currently undertaking a qualification in copy editing.